Why Hemp CBD in Skin Care? 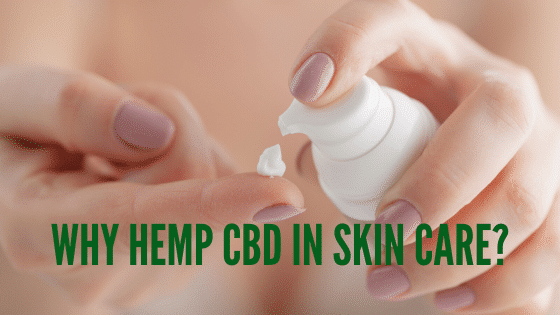 You’ve probably heard the verbiage that the skin is the largest organ of the human body.  This statement is true and supported by many different kinds of research.  The skin is absolutely amazing.  It is absorbent while also being a protectant and repellent.  It has both elasticity and rigidity.

A 2003 study showed that skin cells that produce keratin are part of the endocannabinoid (CBD) system.  A 2005 study found CB1 and CB2 receptors were found in skin nerve fiber bundles, mast cells, epithelial cells of hair follicles, sebaceous glands, and even sweat glands. They are located all through the skin. The skin care benefits of hemp CBD have inspired our CBD oil lotions.

One of the most exciting discoveries shows that CBD oil binds to specific receptors in the skin.  These are the receptors that govern pain, itch, heat and inflammation are all part of skin diseases such as psoriasis, eczema, cystic acne, linctus planus and more. (Tamas Biro et al 2009)

Eczema and psoriasis are issues related to an imbalance in the immune system. Cannabinoids are believed to play an important role in the regulation of the immune system and there is active research going on using CBD oil to treat various skin conditions. (G.A. Cabral and L. Griffin-Thomas 2009). Intense itching and inflammation drives people to distraction and rightly so.

A 2015 CBD study targeted MAST CELLS,  cells that release histamine and lead to pain and itch. So there is a very promising future for CBD as a treatment. According to a 2017 article from the National Eczema Association, CBD has shown “measurable anti-itch, anti-pain, anti-microbial and anti-inflammatory properties, the effect of cannabinoids in patients with eczema (atopic dematitis), has already begun to be demonstrated”! (Peter Lio, M.S. et al 2017).

AS reported by Kayla fioravanti in her book, “A Little Handbook about Topical CBD”. it is believed that hemp CBD works faster for localized issues when used topically rather than being ingested. This is because the CBD goes directly to the CB1 and CB2 receptors in the skin without going through the digestive system.

Most of the research on the topical application of CBD has been done on laboratory rats, specifically those induced with osteoarthritis. In a recent University of Kentucky study, CBD reduced joint swelling and pain while improving mobility in rats with arthritis. (D.C. Hammell et al 2016).  When CBD is applied topically (directly to the skin problem area), it can work directly where it is needed most.  Arthritic joints, carpal tunnel, rheumatoid contractures have all shown improvement after CBD cream application.

Hemp CBD oil is a proven and effective anti-inflammatory. In 2008, it was proven to be effective at stopping sebum overproduction, overproduction of sebaceous gland cells and the resulting inflammation. (Attila Olah et al 2014). This is wonderfully promising as a natural acne treatment rather than those that use harsh chemical agents such as benzoyl peroxide or a retinoid.

In the anti-aging market, the goal is to reduce fine lines and wrinkles.  These are caused by the natural oxidation of the skin (We breathe every day, so we oxidize every day) and free radicals which accelerate aging and decrease skin elasticity.  As  a proven anti-oxidant, CBD is generating huge excitement in the cosmetic industry.

Dr. Jeanette Jacknin from the American Academy of Dermatology (AAD) speaks of two recent studies show the importance of the cannabinoid receptors in the skin for healthy basil cell regeneration.  Basal cells have to regenerate and grow. If they fail to do this, the skin ages rapidly and you will look older, sooner than you should.

These areas are just the tip of the iceberg for the benefits of hemp CBD oil in skin care. Research is progressing at a massive rate.  Big name cosmetic companies are already taking up the CBD banner. With properly formulated CBD topicals and other nutrients derived from Hemp, we finally have an ingredient that at the very least, has produced impressive results as a skin anti-inflammatory.  Visit our CBD Research page for links to multiple studies on the skin.