The Pros and Cons of Barn Cameras 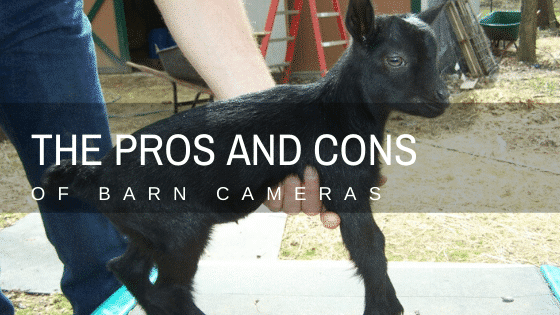 A couple of years ago we invested in a top-of-the-line camera system for our barn so that we could watch goats in the birthing stalls and see if a birth was immediately pending.  The WI-FI cameras do have a good resolution and we can still see inside the stall even with the heat lamps on.  The night vision is good, but not as good as the daytime. There are some video systems where the heat lamps brighten up the video SO much, you can’t see anything.  We don’t have that problem with this system and have been really pleased with it.

It is late January and we just bedded down three expectant does in three pens.  The cameras are working great and we access them on our phones, switching from stall to stall, checking on each mamma to be, multiple times per day.  Even if we are not home, we can see the girls. (I have left the feed mill in a hurry before due to doe signaling).

A few nights ago, one of the does had lost her pre-birth mucus plug.  One that happens were are on a bit higher alert as it tells us she is getting close.  We check all goats each night before heading to bed.  During the night, we usually are up once or twice, and we check the phones again.  This has paid off many times, although it is admittedly hard to drag yourself from a warm bed outside to bitter cold at 2 a.m.

Earlier this week, I woke up at about 4:00 AM and checked my phone.  I noticed a small dark movement in the stall and it wasn’t the doe.  I immediately piped up a tad louder than is normal for me that “WE’VE GOT BABIES!!” to which my husband bolted upright from bed at lightspeed and grabbed his clothes.    He took a quick look at this phone and with an exasperated, tired moan says “Regina, that is just the frickin rooster”.  “Don’t scare me like that”!!!  I said NO!!  I looked again and could see the outline of the rooster’s comb”.   I guess that is what I get for not putting on my glasses and for not being wide awake, to begin with.

At first, I protested saying the Rooster had no business being in the stall in the first place!  My husband, of course, defended Cockburn profusely, saying he is really showing his age, not roosting well or for long and not crowing.  He discovered the heat lamp and decided to fly down for warmth.

Apparently, I really startled Steve to the hilt, because he went out and bought a “Smart Switch”, which allows us to now control the barn lights as well.  So if night vision leaves any doubt whatsoever, we can turn on all the barn lights from inside the house and “confirm” my sightings.  Gee wiz folks, it was an accident.  (snicker, snicker).