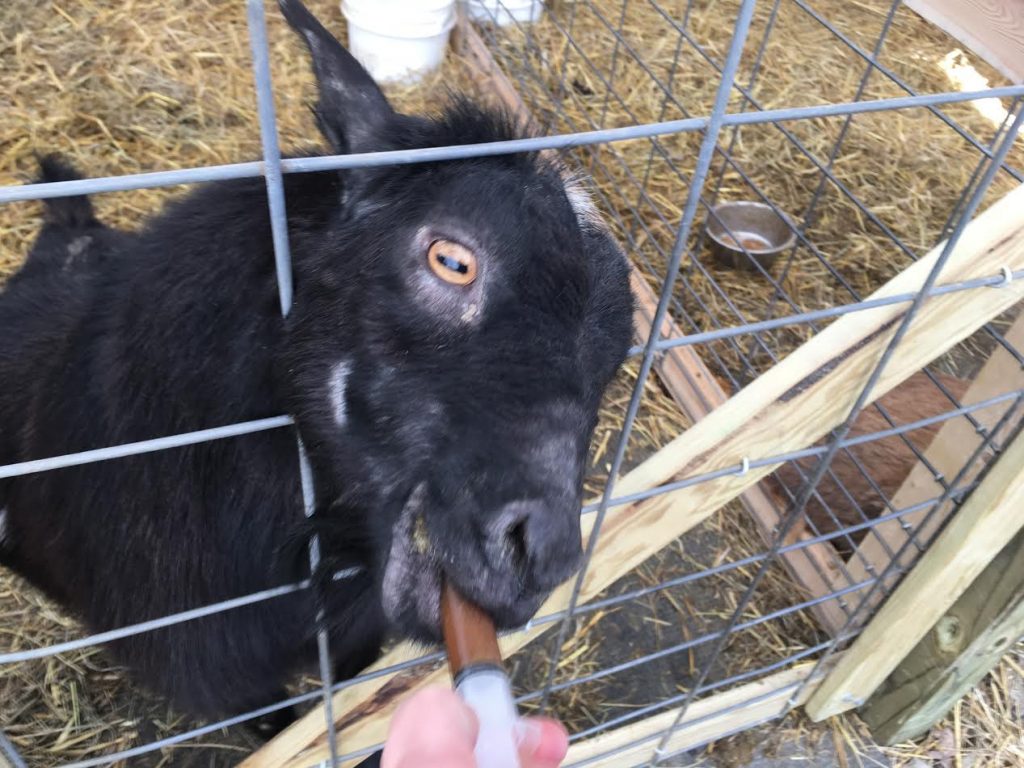 06 MarA “Magic” potion for Goats to Fight off Ketosis

The first week of March has been extremely busy for us.  With participating in the Cincinnati Home & Garden show plus the impending births with four of our does meant we’ve had to do double duty.  I generally accompany Steve to the Home Show, but he was a loner this week.  We have 4 does due (2 are due today as I am writing this).  One has a history of coming a week early, one has a history of major multiple kids and the other two are extremely wide loads.  Every doe reacts to birthing and delivery different, so I have spent quite a lot of time in the barn this week just watching and observing.

Every kidding season, it is smart to wrap your mind around what you may need in terms of supplies, medications, etc.  I packed the mid-wife bag and felt ready.  Last Thursday, I noticed Rosie was beginning to pant, rapidly and it was not a warm day. My first thought was that labor was starting, but working from a tired mind, I later learned I was missing something.

I called the vet as my concerns mounted over her breaths per minute.  Then she said the word that made the light-bulb go on…..SUGAR.  I kicked myself , I KNEW the calorie demands on such heavily pregnant does and could pre-treat for it.

A condition can occur before birth called Pregnancy Toxemia.  After the kids are born, it can also occur and is then called Ketosis. Sometimes the doe cannot consume enough calories to take care of body demands and the kids growing inside, particularly in the case of multiples.

Pregnancy Toxemia/Ketosis is caused by a build up of excess ketones in the blood (urine & milk), due to the incomplete metabolic breakdown of body fat. Because there is an urgent need for calories, the doe’s body starts breaking down her own body’s fat reserves. But this method of metabolism is incomplete, and ketones are left behind in the urine. Pregnancy Toxemia usually occurs within the last six weeks of the doe’s pregnancy. Any increases in stress during these final weeks, can trigger toxemia. In the case of Nigerian Dwarf Goats, multiple babies add additional stress. It is not uncommon for this breed to have triplets, quads and even quintuplets.

Many vets recommend Propylene glycol be given as it is absorbed quickly and works the same as sugar. But given my chemistry background, the idea of giving my goat something that is just molecules away from anti-freeze gives me extreme pause. It also inhibits rumen bacteria which is never a good thing in goats.

“Magic” is a concoction for pregnant goats taught to me by the first breeder we ever bought goats from. “It cures what ails them”, she said. For any goat owner who has ever seen their goat go off their feed, become lethargic or start trembling for an unknown reason, it is a safe initial go-to to help relieve stress and “power up” the body. I’ve included the recipe below as there is nothing in this that will harm your goat.  Some goats resist it being squirted in their mouths at first, but generally learn it is a sweet, flavor full delight and will learn to suck from the syringe very willingly.

I gave two 15 ml doses to Rosie. Over the next hour, her respiration relaxed and returned to normal. The tremors stopped and she started eating and drinking again. Last but not least, her bright eyed, friendly expression returned and she became more active overall. 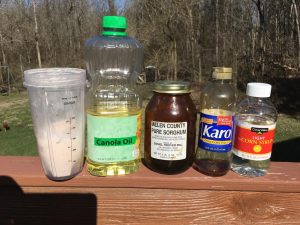 “MAGIC” is inexpensive to make. You don’t need both corn syrups, but I include white corn syrup in the photo to show that it can be used in a pinch.

A pint jar will provide a good supply to keep on hand for emergencies. The corn syrup provides sugar, the molasses is high in vitamins and minerals, particularly iron and calcium. The vegetable oil is an excellent source of fat and the TUMS or anti-acid tablets help provide the calcium which facilitates contractions for birth. Water helps dissolve the crushed tablets more fully and encourages the emulsification of the TUMS into solution.

Fill the pint jar 1/2 way with real molasses. Fill 1/4 of the jar with either dark or light Karo.  (Whichever you have on hand).   Next fill the remaining 1/4 of the jar with canola oil and very hot water.  Now add 2 teaspoons full of completely crushed TUMS or other calcium based antacid tablets.  Stir very well.  If you can cap the jar and shake it vigorously, that works best.

Fill a 15 – 20 ml syringe and slowly squirt in the goat’s mouth. Fortunately, Rosie loves it as you can see. She delivered triplets Sunday afternoon, all three healthy, strong and walking within minutes. I have absolutely no doubt that “Magic” played a part.

Using MAGIC when treating ketosis in goats helps ensure babies are born ALIVE and strong enough to stand and nurse. It helps Momma Goat avoid Ketosis as the demand for her milk production will now sky-rocket.  As Grandma said, “An ounce of prevention is worth a pound of cure” and MAGIC is a great tool for any goat owner.