The American Dairy Goat Association sponsors a National Show every year in the summer at different locations around the United States.  This is to offer goat owners & breeders the opportunity to compete with their goats, network with other goat dairy lovers, and support the development and growth of the dairy goat industry.

The 2021 Show was held at the Kentucky Exposition Center in Louisville, KY, from July 17th through July 22nd.  This was the third National Show we have attended since 2017.  It is an opportunity to show Junior Does (young animals who are not yet milking) and Senior Does (does who have been bred, had kids, and produce milk).  The bucks (males) do not compete at the ADGA Nationals.

The goal in competing at this National Show is to “make the cut” or be somewhere in the top 20 placings rather than be excused from the class.  Given the size of classes, making the cut is an honor in itself.

Honey Sweetie Acres Tesla is a 9-week old doeling.  Tesla was born in May of 2021, which makes her anywhere from 2 weeks to a month younger than most Junior Kids competing. To be a Junior Kid, the birthdates allowed are April 1st and after.  We knew she would be smaller than some of her competitors, but we viewed it as an opportunity for Tesla to get ring experience whether she placed or not.  Even at her tender age, we saw some things about her we felt were above average.

Tesla entered the Junior Kid class under the capable handling of Dan Cassel from our Certified Humane partner farm, CUATLILREDBARN. Dan is a professional handler with a talent for “setting animals up” for review in the show ring.  There were 32 entries in the Junior Kid class, with entries from California to Maine.  Steve and I watched Telsa move about the ring obediently, feeling like proud parents of a sort. (I know, we are weird, LOL).  About halfway through the class, the lead judge pointed at her and motioned for Dan to enter the final lineup.  Steve and I literally high-fived each other as we expected her to be excused, especially given her diminutive size compared to other, better-matured doelings.  Tesla achieved the 15th spot out of 32 doelings.   Hopefully, it is the start of a great future! 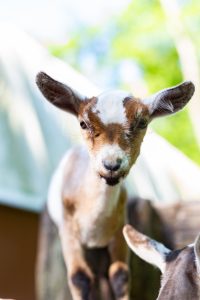 There were 58 entries in the Senior Yearling class. With such a huge class, the judges took turns examining groups of doelings and pulling the best out of each for the final lineup, one by one.  With Dan Cassel showing Bella Rosa, Regina showing Epitome, and Chase, another experienced helper showing Zenith, all 3 girls competed against each other in this class.  Our hopes were for Bella Rosa to make the final cut as she has had the most wins in her career up to this show.

We were delighted again when ALL three doelings were selected and put in the final lineup while the remaining 38 does were excused from the class.  Bella Rosa was awarded 9th place, Zenith was put in 17th place, and Epitome was put in 18th place. When the judges presented their reasons for each placing, each doe was commended for their length of the body, strong, correct legs, and overall general appearance. Zenith and Epitome are full sisters out of our 2017 National Junior Champion, Dulcinea.  They did their Mom proud! 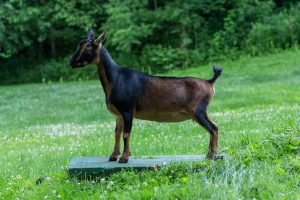 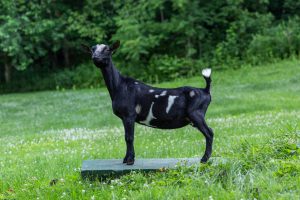 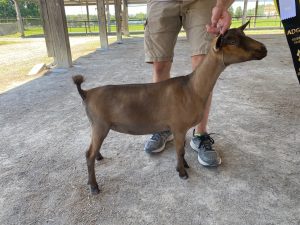 Group classes are also held at the National Show, where multiple animals are shown together. For example, we competed in Best Three Junior Does with the same three girls, and they placed 9th out of 20 triplet groups.

JUNIOR GET OF SIRE CLASS

This class is an evaluation of 3 does based on their sire.  Does he create consistency in his daughters?  Is that apparent even though each doe has a different dam (mother)?  Does the sire pass on positive characteristics to all his progeny?

It is primarily breeding farms that bring three doelings from the same sire to compete in this class.  It helps to substantiate their sire’s value and guide future breeding programs.

CUATLILREDBARN Worthy Rival is the sire of our Mercedes, Maserati, and Ebony Rose.  The girls compete as one group for evaluation.  Out of 15 doeling groups, our little pod of girls (doelings) placed 5th!! 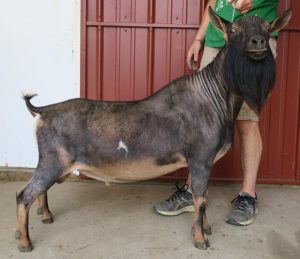 Wood Bridge Farm Undisputed is the sire of Bella Rosa, Zenith, and Epitome.  Despite being a different sire, these three girls placed right behind Rival’s kids and garnered 6th place overall.   This tells us both our Bucks (sires) produce exceptional quality doelings from a wide range of different adult does in our herd. Additionally, despite differences in the dams (mothers), the kids born are consistently well built and developing nicely. 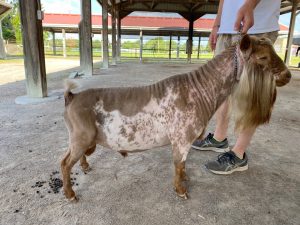 Attending a National Show requires months of pre-preparation with each animal. It is a lot of work, both before the show and during the week it takes place. Caring for animals away from home has its own challenges. It is an honor to attend the show with the best farms in the nation and many other dedicated goat owners and farms.  We were happy with our results given the outstanding quality of the competition from all over the US.  We are excited to plan breedings for the fall and the arrival of 2022 kids knowing what we learned from attending.

Thanks to everyone who emailed, sent texts, and Facebook messages wishing us well.  We appreciate the “fan club” that our goats have, and we hope you find the results educational and interesting!