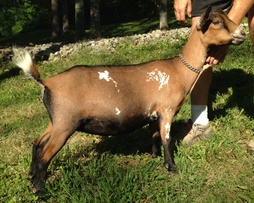 Steve and I were in Florida visiting my sister outside Orlando in November, for Thanksgiving.  Many times on trips, we will conduct business either by pursuing out-of-state wholesale store accounts for our products or visiting other goat farms in the area.

We had heard of the Viking Nigerian Farm in years past and took the time to stop by and meet the owner….Gilbert Helgeland.  Gilbert was retired but had a number of very successful years in the Nigerian Dwarf world and in the show ring.  He was down to 5 goats in total when we visited. As we were chatting, a little doeling ran toward us from the barn.  She was very pretty and well put together.  I was stuck by her level topline at such a young age.  Babies change a great deal as they age, but this little girl was showing promise.

As we prepared to leave, I quietly negotiated to buy the doeling, then informed my husband he was looking at this “early” birthday present. (his birthday is in Feb).  He was a bit surprised but didn’t argue.  Now the trick was to get her home.  We had flown to Florida, but she was too young for the airlines to allow her to fly, so we had to wait another 6 weeks before she could leave. We arranged the paperwork with Delta Airlines, then my sister in FL picked up the doeling and took her to the Orlando Airport to be put on the flight to Cincinnati. I picked “Fire” up at the Delta Cargo Terminal in Erlanger, KY.  I had a good laugh as they opened the doors and there were multiple Delta employees gazing in the crate, talking baby talk to her.  They had seen many a dog and cat come through, but few goats, so she was a celebrity.

Fire arrived home to a less than warm welcome from all the other goats.  An adjustment period is often normal, but for some reason, she was ostracized from the outset. Few does would share a feed bin, Fire was butted away and chased outside over and over again.  We intervened when we could, but she endured a lot of extended animosity in the early weeks of her arrival.

We think this has contributed to her personality which definitely has its negative bent. Unlike Rosie, she milks well and is overall pretty cooperative.  She really began to shine in structure and production so we decided to show her at a regional dairy goat show. That’s when she decided she had something to say about it.

The first local show we attempted did not go well.  Fire would not walk. She spread her front legs apart and dropped her head to the ground. Like a child who does not want to be picked up, she was dead weight. We gave up on showing that day as she would not progress an inch.

We continued to work with Fire at home and slowly achieved more cooperation working between her moods.  We took her to the Darke Co Fair in Greenville, OH in August 2 years ago.  She walked relatively well but I cheated with treats inside my hand to coax her if she stalled.  She won her age group and then to our surprise, was crowned Grand Champion Senior Dairy Doe in 2017.  We took Fire to the 2018 National Show in Columbus, OH, but the day before her class, she went off her feed.  She lost the bloom and capacity on her udder, so we pulled her from the class. Oh well, it happens. But there was a silver lining. Fire had a doeling in 2017, Honey Sweetie Acres Imzadi (the name means Beloved). Imzadi went on to win Junior Champion Doeling at the regional Ohio show. In 2019, Imzadi delivered a healthy doeling and buckling on March 5, 2019.

But what we noticed is that Fire is still attached to her grown doeling. As Imzadi went into labor, Fire layed down by the wire wall which separates the adult does from the private birthing stall.  She remained there as Imzadi gave birth. We don’t pretend to say that goats have the same emotional connections as people, but we have seen situations that can make you wonder.

While not particularly social, Fire is an important part of our herd. Like most goats, bring out the treats and watch for the semblance of a smile.  She probably would even allow you to scratch her neck.