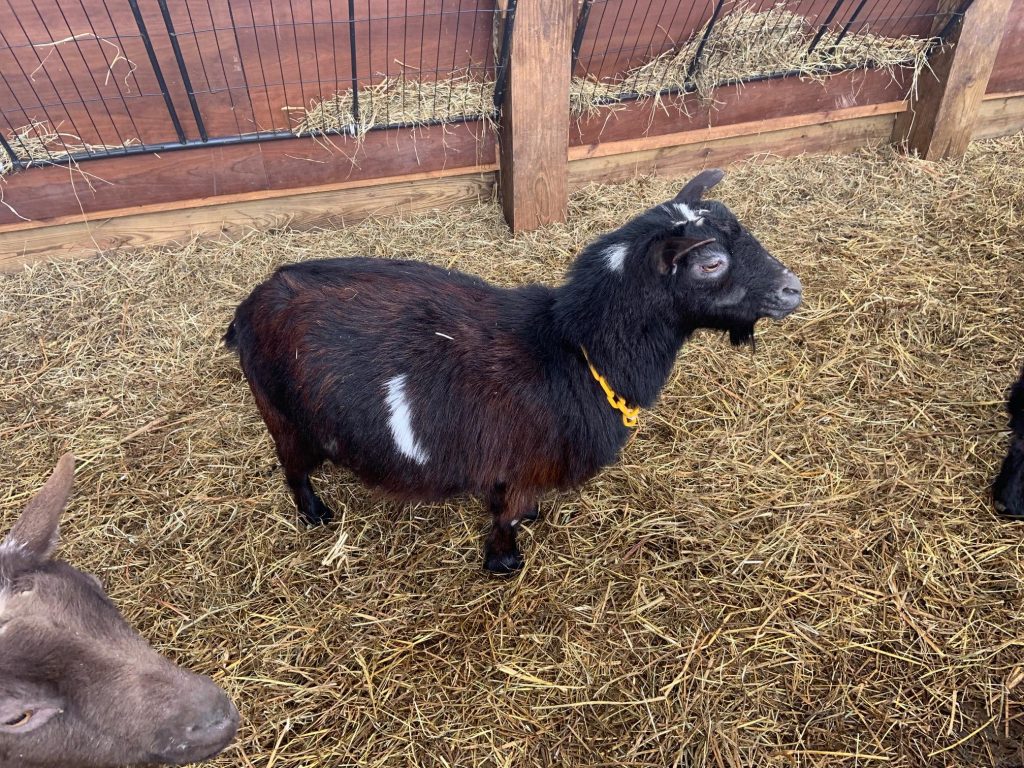 We have so many people interested in the stories behind our goats, that we decided to profile them in the Blog!  Some have very interesting back stories, like our goat today, Rosie.

Rosie isn’t the prettiest goat around, she won’t win a beauty contest.  Early in her life, long before we owned her, a horse kicked her in the face and the result was a twisted facial profile and nose.  It gives her character, but keeps her out of the show ring. She is an older doe, (6 years) and has lost a back tooth on the right side, which resulted in a visible pouch on her jar. (check out the photo below).  We often joke it is her “chaw”.  She has a seasonal skin condition that manifests in the winter, and then disappears in the summer to the consternation of the vet. 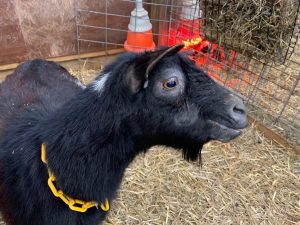 We learned about Rosie from another breeder.  Her lineage was of great interest as she was half-sister to our very best doe, Dancing Gal. The particular line is dying out, so we made arrangements to buy her.

The family that owned her had purchased her when she was pregnant with her very first set of kids.  They enjoyed the babies but were never interested in milking Rosie for her milk. They let the babies take it all and hence never handled Rosie’s udder.  Which we understood,  but underestimated how much of a problem that would cause.

After a doe delivers, we allow her up to 2 weeks with her kids. Once they have had their colostrum and had a good start, we train them to bottles.  But we still fill the bottle with mother’s milk.  The time came to start milking Rosie, and she went absolutely, unabashedly ballistic.  From the moment Steve’s hand touched her udder she leaped upward, kicked, fought and knocked over the milk bucket. Much like the funny cartoons where the bucket ends up on the farmer’s head, Steve was not laughing.

Steve was determined that this girl would submit eventually if we just stayed with it.  Steve has had moments of incredible patience interspersed with more moments of colorful metaphors filling the barn air.   Initially, we tried hobbles and tie downs, and finally resorted to actually lifting her rear end up and holding her while Steve milked frantically. Nothing worked for very long.  After 5 years, here’s where we are:

Early in the milking season, Rosie will grudgingly tolerate milking lines attached to the udder as long as she has FOOD in the bowl. But let the food run out and the Rosie rocket launches. Don’t even think about hand-milking her out.  No chance. 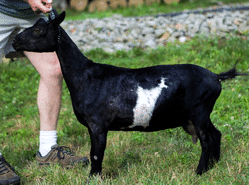 By the middle of the season, she is better with the lines and “starting” to let Steve hand milk the remainder out. But her tolerance is incredibly short. By the very end of the season, she accepts the lines and will let him hand milk to a point.  But when her mood says she is finished, she is DONE and nothing but an exhausting fight and spilled milk is to be gained by trying to continue.

From a business perspective, there are many goat farms that would have kicked her hind-end to the curb a long time ago.  No one could blame them. But Rosie has a funny sweetness about her otherwise.

She is among the first to greet us when we enter the barn, her eyes light up like beacons when we head toward feed barrels.  Apple & peppermint treats create a face full of glee as she pushes her way to the front.  But her real claim to fame is her genetics.

Rosie had always delivered beautiful babies every year.  Two years ago, Rosie delivered “Honey Sweetie Acres Daniela”who placed 9thin the Senior Yearling class at the 2017 Dairy Goat National Show in Madison Wisconsin, competing against 60 other doelings.  What a way to redeem yourself Rosie!!!

But she wanted to make us eat crow.  Last year, that daughter, Daniela gave birth to “Honey Sweetie Acres Daenerys” who became the 2018 Reserve National Grand Champion Doeling at the National Show in Columbus, OH.  Daenerys also won the Senior Kid Class over 78 doelings at the same show.  So, her granddaughter made her proud.  But Rosie wasn’t done yet.

Rosie produced a daughter- “Honey Sweetie Acres Rose Otto” in the spring of 2018. Named for one of the most expensive essential oils on the planet, Rose Otto went to the National Show as well and competed against Daenerys.  Rose Otto placed second only to Daenerys.

So, long story short, Rosie’s offspring were in the top 2% of young doelings at the 2018 National show. So I guess you can now see why we tolerate her antics on the milk-stand.  As I write this Blog, Rose is expecting again and is due sometime around mid-March.  We are excited to see the bundles of joy given her production history. She is a trouper at birthing and a great mother.

Watch Facebook for her birth announcement.  Now, you can appreciate who she is and cheer her on!