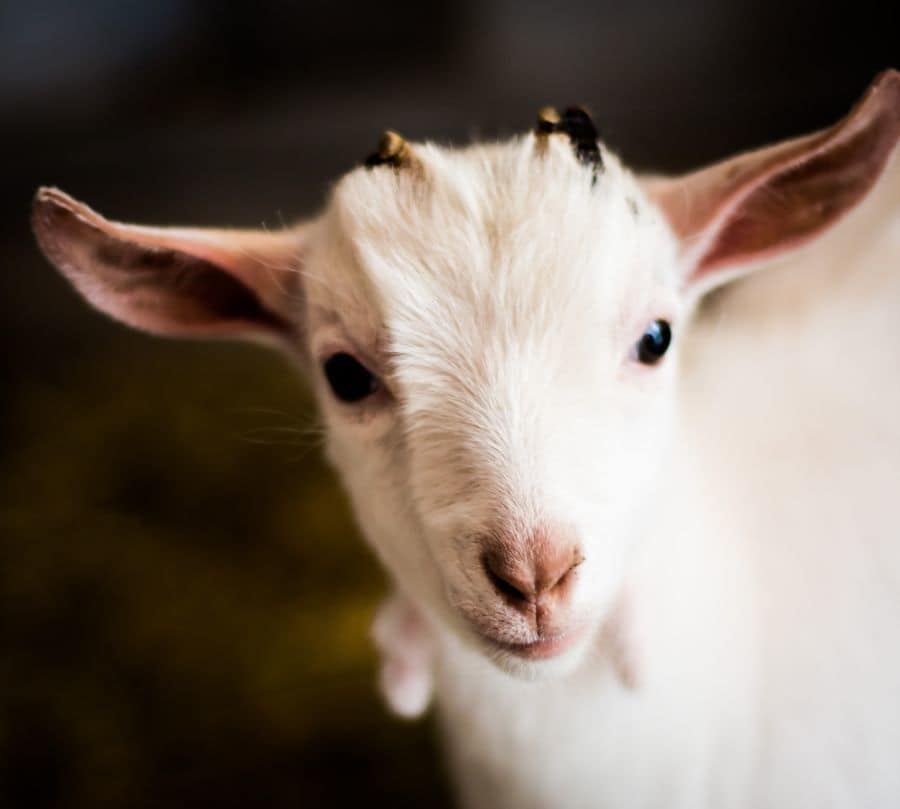 There is a common misconception that goats are not intelligent animals. They are maligned as stupid, dirty and bullheaded. Both research and our own experience proves goats are intelligent.

Earlier this year, Queen Mary University in London (UK), published their results of a goat “intelligence” study. Researchers used a dozen goats and taught them to retrieve a grass treat in a box by grabbing a string and pulling a lever.  The observed that 9 out of 12 goats learned the process very easily, but more importantly remembered how to work the box over 10 months later!!  Visit this link to read the story.

Since researchers do not live with goats on a daily basis, they needed a project to prove their theory.  This came as no surprise for those of us who interact with these little caprines on a daily basis.  In reality, goats are very smart……sometimes too much for their own good.

Our practice is to milk our goats in the order in which they kidded.  Whoever had babies first in a given year will go first in the milking routine.  We have observed after just a few repetitions, that the goats know their order, lining up at the gate when we come to retrieve the next one.   If it is not their turn, they will stand their ground and watch as the others head for the gate.  As part of this process, we also discovered, the goats have learned to recognize their names.

I doubted this in actuality even though Steve would come in the house and tell me stories of how they responded to their names and the specific hand gestures he was using.  I scoffed and said, “Oh, they don’t know their names, they just want the food!  They know the routine by heart.…blah, blah, blah…”.  Wives sometimes have an insatiable need to prove their husbands wrong………my mistake.  I really should not have doubted him.

I had the evening milking routine to myself one evening and thought I would put his theory to the test.  I deliberately switched the milking order and called Taffy by name with a hand gesture Steve had been using.  She looked right at me and trotted to the gate, much to the displeasure of Shawna who KNEW she was first in line.  She proceeded to butt Taffy for interfering.

OK,…..one lucky break I thought.  I further pushed the envelope, switched the order again and called Nadi.  She immediately stopped eating hay, turned her head around and looked at me as if to say “Really”? Well you don’t have to call ME twice”. She made a beeline for the gate, pushing her way to the front past Crystal who was in line.  Once again, head butting and this time, frustrated goat vocalizations ensued.

Now, each and every goat in the pen was eyeing me suspiciously, watching my every move. (Trust me, THAT is an eerie feeling).  They were WATCHING, waiting to see if I would take the goat who was impatiently waiting next in line. Obviously, by the looks on their faces,  I had totally lost my mind by upsetting their routine.  Stupid human.

Goats are a lot like children.  They can become very comfortable and secure with a routine and don’t care for change.  At this point ALL of the girls began to push and shove towards the gate in the hope that they would somehow be next.  I had broken protocol, so it was now every doe for herself. I quickly learned that attempting to extract a doe from a group of several pushing forward with all their might….. simply does not work.  Now there was chaos. By allowing a temporary breakdown in discipline, I opened the door to pushy, competitive behavior that seemed to grow exponentially.  I am happy to say everyone is back in sync now, but we believe this little experiment is also strong evidence of impressive intelligence.

In talking to other goat owners we have heard stories of goats who, if they could not jump out of their fenced enclosure…….. would move, push, & pull appropriate items over to the fence, then proceed to climb up and out.  On the Discovery Channel, there also was a story of a goat who lived with a blind horse and faithfully guided the horse out to the pasture and back to the barn every day.

Lastly, we do believe that goats form lasting bonds with long-time caregivers.  This ability is usually seen among intelligent species. Heidi is a two year old doeling who was the only survivor of a C-Section on Daisy in January of 2013.  A very tiny baby, Steve spent nearly two weeks feeding her all through the night through a tube inserted through her nose.  She spent a lot of time napping on his chest as a baby. We kept her in the house for almost six weeks, helping her get stronger. Watching a baby goat “boinging” around your foyer is a sight to remember.   Now, whenever we pet or hug her, Heidi will wrap her head and neck around ours.  Nicknamed “Daddy’s Little Girl”, Heidi visibly, routinely, but more importantly intentionally displays affection.

Is it any wonder we are so fond of these little caprines?